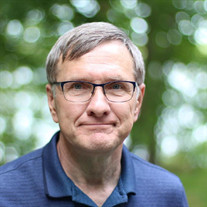 William (Bill) J. Tomczak, a long-time resident of Park Falls and Butternut died unexpectedly on January 14, 2022, at the age of 70 while visiting family in Minneapolis, MN. Bill is survived by his wife, Barbara (Barb) Tomczak (née Anderson); his children, Michelle (Mike) Nelson, Christy Tomczak and John Tomczak; his grandchildren Seth and Sydney Nelson, and Naya and Henry Tomczak; sister Jean Dragovich and brothers Bob (Nathalie), Jim (Barb), Walt (Diann), Joe (Estaire), and Don (Molly) Tomczak, his brothers-in-law Dave (Diane) Anderson Jim (Gail) Anderson step-mother-in-law Gail Anderson and numerous nieces and nephews and other relatives and friends. Bill is preceded in death by his father, Jack, and his mother Clara (née Niebauer). Bill was born on August 15, 1951, in Park Falls, the third child of Jack and Clara Tomczak. Bill attended school at St. Anthony’s and graduated from Lincoln High School in 1969. Bill was in Boy Scouts and attained the rank of Eagle Scout in 1968. He was the first of 11 family members to earn the rank. He was proud of the tradition he had started because you should finish what you start and if you’re gong to do something you should do it right. Bill met his wife Barb in 1970 while both were attending college in Superior. During the summers of their courtship Bill would hitchhike from Park Falls to Ashland to see Barb because Jack and Clara still had a litter of boys at home and cars were scarce. Had any of his children ever hitchhiked for a date he would have wondered out loud what was wrong with them. Bill and Barb married in 1972 and would have celebrated 50 years of marriage at the end of February. Bill graduated with a degree in Sales and Marketing from the University of Wisconsin - Superior in 1973 and started his sales career that same year at Abex Corporation in Superior. In 1977 Bill began his long career at the Flambeau Paper Mill, like his father and his father’s father. Bill found his niche at the paper mill by specializing in the sale of the pulp process byproduct commonly referred to as “liquor.” The “Liquor Man” provided a wonderful life for his family and traveled the world during his career. He would remind his family of his travels with a frequent “I’ve been there” while watching any movie that was set anywhere. “Davenport? I have a client there.” In 1997 he earned his MBA from Cardinal Stritch University. Bill and Barb briefly lived in Butternut before moving to Park Falls where they did the bulk of their child raising. In 1991 Bill and Barb split the difference and moved their family to Schnur Lake and carved out quite the little paradise for themselves. Bill loved snowmobiling, fishing, boating, and working with his hands. He was a fan of the Packers unless there was tree that was begging to be cut down on a Sunday afternoon. He was active in the Knights of Columbus and Lions Club in Park Falls. From the discarded slate shingles of the paper mill office building that beautifully adorn his home to the discarded “Hometown” sign from from the old Shopko that less than beautifully adorns his yard, Bill saw opportunity where others would not. Oh, the treasures he would bring back from the dump for his grandchildren! (Did you know that if you hang CDs from trees in the woods that they will look really neat when headlights reflect off of them?) BIll’s retirement was spent woodworking and collecting items from online auctions that he couldn’t live without. He continued to stay active with outdoor projects and was a key assistant to his wife Barb, volunteering time in the construction of the Reading Tree at the Park Falls Library. Bill loved his wife and his children very very much and all of the spouses and children and pets that came and went along the way. He professed his love for his family as often as a man of his generation would but he showed it by giving his time and his effort time and time again. Bill was loved by many and will be missed greatly. Services will be held at Birch Street Funeral Service in Park Falls on Saturday January 22, 2022 at 4:00pm. Deacon Robert Schienebeck will officiate. A visitation will be held on Saturday at the funeral home from 3:00pm until the hour of the service. Per the family’s request, anyone who is not vaccinated, please wear a mask. Thank you. Birch Street Funeral Service is assisting the family. www.birchstreetfuneralservice.com

The family of William "Bill" J. Tomczak created this Life Tributes page to make it easy to share your memories.

Send flowers to the Tomczak family.