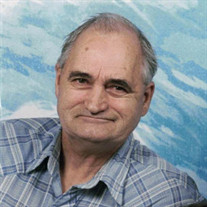 Not sure what to send?

William (Bill) James Gavin Jr., 82, passed away peacefully at Park Manor, Park Falls, WI, on 19 February 2022, where he resided and called home for the past 1 year. Bill was born to William J. Gavin and Lulubelle Gavin on 01 January 1940 in Couderay, WI. He later married Janet Nichols on 08 May 1965 in Mondovi, WI. They spent most of their life in Mondovi, until Janet moved to Virginia Beach, VA in 1999. Bill had a free spirit who loved life, family, music, dancing, telling jokes and helping others. In his life time Bill had too many jobs to list. But his hobbies that his daughter, JoAnn, will recall include fishing, deer hunting (mostly told stories about the buck that got away or shot at and missed), being out in the woods cutting up some fire wood, lecturing me about my driving and speeding (slow down this is a speed trap in this area. He must have known from experience, because we got pulled over.), let’s not forget about his junk collection that he would call his treasures and we would all call junk. While in the Park Manor, he love playing Bingo, being the assistant Activities Director and making others laugh. He was quite the card that was cut from his own cookie cutter. Survivors include: (wife) Janet (Nichols) Gavin, Silverdale, WA, (daughter) JoAnn Gavin, Silverdale, WA, (two grandsons) Shane and Bruce Gavin, Silverdale, WA, (sister and brother-in-law) Marie and Hearts Martin, Winter, WI, (sister) Mary Madru, Beloit, WI, (brother and sister-in-law) Dennis and Betty (Kelms) Gavin, Great Falls, MT, (sister-in-law) Barb (Nichols) Gavin, Park Falls, WI, many nieces and nephews, cousins and other family members and let’s not forget the numerous other friends. Bill is proceeded in death by: (parents) William J. and Lulubelle Gavin Sr., (four brothers) Jerry Sr., Roger, Urban and Danny, two infant Baby Girl Gavin (died at birth), baby infant son, William J. Gavin (died at birth), (daughter) Rose (Gavin) Lewis, (grandchildren) Christine Rose and George William Lewis, (brother-in-law) George Madru Sr., (sister-in-law) Donna (Nichols) Gavin, (nephew) Roger Gavin). A funeral is scheduled for 16 July 2022, at 12:00 pm (noon) with a reception to follow at Cavalry Lutheran Church, 3214 W. State Road 70, Loretta, WI 94896, . All are welcome to attend and celebrate Bill’s life. Family time will be from 11:00 am to noon on 16 July 2022. Burial will be at the Loretta-Draper Cemetery in Loretta, WI.

William (Bill) James Gavin Jr., 82, passed away peacefully at Park Manor, Park Falls, WI, on 19 February 2022, where he resided and called home for the past 1 year. Bill was born to William J. Gavin and Lulubelle Gavin on 01 January 1940 in... View Obituary & Service Information

The family of William "Bill" James Gavin created this Life Tributes page to make it easy to share your memories.