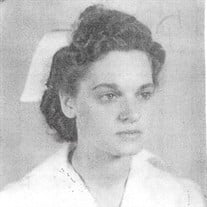 Park Falls Sadie “Sally” Adell Stueber age 92, of Park Falls, died on Saturday January 2, 2016 at Park Manor Nursing Home in Park Falls. She was born on March 8, 1923 in Park Falls, the daughter of Joseph and Marie (Gall) Bennett. Her early life and schooling were in Morse and later in Fifield. Sally, as she was most commonly called, was a nurse at the first Park Falls Hospital, now called Park Place. On June 27, 1942 she married Arnold J. Stueber, Sr. The couple owned and operated Stueber's Beverage, Inc. bottling their first bottle on February 23, 1946. In 1974 the couple founded Stueber's Ace Hardware, formerly known as Southside True Value Hardware and in 1982 they purchased the First National Bank. Sally was active in the Catholic Daughters, Christian Women, and the Park Falls American Legion Auxiliary. She was an active mother helping with Brownies, Girl Scouts, 4H, and the Park Falls High School Band. She is survived by: (2)children: James (Dawn) Stueber of Park Falls Mary Beth (Howard) Luethmers of Park Falls (13)grandchildren, (9)great-grandchildren her brother-in-law Raymond Stueber of Park Falls her daughter-in-law Ruth Stueber and many nieces, nephews, and other relatives and friends. She was preceded in death by her parents, her husband Arnold Sr., Her son Arnold Jr., and her three sisters: Infant sister Francis Bennett, Alice Cassidy, and Josephine Clark. Funeral Services will be held on Tuesday January 5, 2016 at 11:00am from St. Anthony's Catholic Church in Park Falls. Fr. Shaji Pazhukkathara will officiate. Burial will follow at Nola Cemetery in Park Falls. A visitation will be held on Tuesday from 10:00am until the hour of the service at the church. In lieu of flowers, memorials to St. Anthony’s Catholic School would be appreciated.

The family of Sadie "Sally" Stueber created this Life Tributes page to make it easy to share your memories.

Send flowers to the Stueber family.