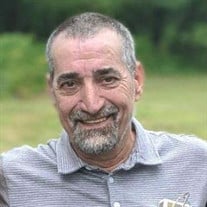 Russell “Roscoe” Paul Zimmermann age 62, of Park Falls, formerly of Phillips, died surrounded by his wife and family on Thursday March 24, 2022, at his home. He was born on March 23, 1960, in Marshfield, the son of Ben and Geraldine (Seliger) Zimmermann. Russ moved to Phillips in the 1980’s and worked as a carpenter for his father’s business Zimmerann & Son’s for thirty years. He moved to Park Falls in 2012 and on August 3, 2013, he married Corlene Gentzel. He worked ten years as a security guard at the Flambeau Paper Mill and then for three years at Weather Shield. He enjoyed fishing, snowmobiling, ATVing, gardening, and spending time with his family and friends, especially his pal “Bentley”. He is survived by his wife Cory, nine brothers and sisters: Jean (Ken) Weichelt, Jerome Zimmermann, Jim (Diane) Zimmermann, Kevin (Jean) Zimmermann, John (Sandy) Bilgrien, Bill (Kathy) Zimmerann, Mary (George) Ley, Lisa (Jim) Walcisak, and Don (Karen) Zimmerann, and many nieces, nephews, and other relatives and friends, including his dog “Bentley”. He was preceded in death by his parents, his daughter Shay Zimmermann, his brother and sister-in-law David and Nancy Zimmermann, his father-in-law Dick Gentzel, and niece Brittany Zimmermann. A memorial service will be held at St. Therese of Lisieux Catholic Church in Phillips at 11:00am on Friday April 1, 2022. Fr. Madanu Lourdu Raju will officiate. A visitation will be held at the church on Friday from 10:00am until the hour of the service. In lieu of flowers, memorials to St. Jude Children’s Research Hospital would be greatly appreciated. Birch Street Funeral Service in Park Falls is assisting the family. www.birchstreetfuneralservice.com

The family of Russell "Roscoe" Paul Zimmermann created this Life Tributes page to make it easy to share your memories.

Send flowers to the Zimmermann family.