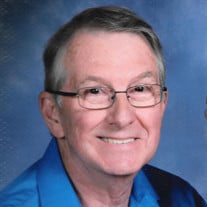 Ronald J. Schoch age 76, of Park Falls, died peacefully at his home surrounded by his loving family on Wednesday July 26, 2017 after a short battle with brain cancer. He was born on May 9, 1941 in Glidden, the son of Theodore and Beatrice (Willerth) Schoch. He attended the Most Precious Blood Catholic School in Glidden graduating the 8th grade in 1955 and then graduated from the Glidden High School in 1959. After his graduation he served in the United States Army, serving in Germany and was discharged in 1961. On February 2, 1963 he married Janice Peterson. The couple lived in Glidden until 1964 when they moved to Park Falls. Ron was an avid baseball fan and played on the Glidden High School team and the Glidden City team under coach Matt Hart. He operated Pao's Bar and was half owner for two years. Ron then worked for the Flambeau Paper Mill for 34 years retiring in 1999. He served as a union officer for 16 years including Union President. He later took a a salaried position as a tour supervisor for 17 years. Ron was elected to the Park Falls City Council in 2000, serving as Chairman of the Personnel Committee and President of the City Council. He also served on the Park Falls Housing Authority Board of Directors for over 20 years as the vice chairman for many years. He was a member of St. Anthony's Catholic Church in Park Falls and served on the Parish council and Finance Council for over 25 years. He was a Minister of Communion and very active in the Parish. He was a member of the Knights of Columbus and served on the Park Falls Country Club Board of Directors. He enjoyed golfing, the outdoors, hunting and fishing, especially Elk hunting in Colorado and his many fishing trips to Canada. Much of his time was spent at their cabin on Thompson Lake with his wife and their family. He enjoyed snowmobile and ATV riding and enjoyed many vacations in Mexico, Gulf Shores, AL, Green Valley, AZ, and the Dominican Republic. He is survived by: (3)children: Ronald (Natalie) Schoch of Park Falls Deb (Perry) Hughes of Park Falls Rebecca (Scott) Radtke of Superior (5)grandchildren: Adrian (Ashley) Schoch of Eau Claire Colleen Hughes of Park Falls Kristina Radtke of Duluth, MN Jillian Radtke of Superior Jack Radtke of Superior his great-granddaughter: Madison Hughes of Lusby, MD his brother: Dave (Carol) Schoch of Glidden his sister: Margie (Bill) Bernhoft of Ashland his brother-in-law: Larry (Betty) Peterson of Park Falls and many nieces, nephews, and other relatives and friends. He was preceded in death by his parents, his wife of 54 years, Janice, his brother Richard, his in-laws, and his grandson Corey Hughes. Funeral services will be held on Monday July 31, 2017 at 11:00am from St. Anthony's Catholic Church in Park Falls. Fr. Shaji Pazhukkathara will officiate. A visitation will be held on Monday at the church from 9:00am until the hour of the service. Interment will take place at Nola Cemetery in Park Falls with military rites under the auspices of the Park Falls American Legion and VFW Posts.

Ronald J. Schoch age 76, of Park Falls, died peacefully at his home surrounded by his loving family on Wednesday July 26, 2017 after a short battle with brain cancer. He was born on May 9, 1941 in Glidden, the son of Theodore and Beatrice (Willerth)... View Obituary & Service Information

The family of Ronald J. Schoch created this Life Tributes page to make it easy to share your memories.

Send flowers to the Schoch family.