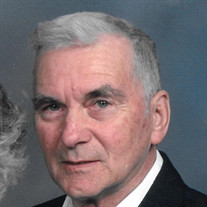 Raymond J. Poetzl age 81, lifelong resident of Fifield was welcomed into eternal life by angels, with his loving and caring wife at his side at his home on the morning of May 14, 2018. On June 3, 1961 he married his wife of 57 years, Ethel Salandich. Raymond was a veteran of the United States National Guard and supported his family by doing what he loved, which was being outdoors. It consisted of logging, road construction and his love of operating his own equipment while helping others. For 46 years Ray and his wife Ethel were the dedicated caretakers of Forest Home Cemetery in Fifield. In his retirement years Ray would spend his time helping family and friends of the Fifield area. He also did a lot of snowplowing with his Chevy. He is survived by: His wife Ethel of Fifield, the five children he and Ethel raised: Raymond (Renee) Poetzl of Park Falls James (Robbin) Poetzl of Cottage Grove, OR David (Mistie) Poetzl of Menominee, MI Virginia (Adam Canik) Poetzl of Butternut Robert (Erica) Poetzl of Porterfield (20)grandchildren, (9)great-grandchildren his brother Edward Poetzl of Menominee Falls his sister Delores Lobermeier of Fifield and many nieces, nephews, and other relatives and friends. He was preceded in death by his parents, his infant grandson Derek Poetzl, (3)brothers: Lawrence & Norbert McKeever, and Thomas Poetzl and his sister Rita Nitke. Funeral services will be held on Friday May 18, 2018 at 11:00am from St. Francis of Assisi Catholic Church in Fifield. Deacon Chet Ball will officiate. Burial will follow at Forest Home Cemetery in Fifield with military rites under the auspices of the Fifield American Legion Post. A visitation will be held on Friday at the church from 9:30am until the hour of the service. A special thank you to Flambeau Home Health and Hospice as well as all friends and relatives who helped support Ray and Ethel through these difficult times. The Novitzke Funeral Home is assisting the family.

Raymond J. Poetzl age 81, lifelong resident of Fifield was welcomed into eternal life by angels, with his loving and caring wife at his side at his home on the morning of May 14, 2018. On June 3, 1961 he married his wife of 57 years, Ethel... View Obituary & Service Information

The family of Raymond J. Poetzl created this Life Tributes page to make it easy to share your memories.

Send flowers to the Poetzl family.