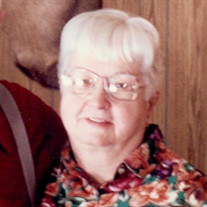 Philomene “Philly” Johnston, Age 92, of Park Falls, died on Tuesday February 5, 2019 at Maple Ridge Assisted Living in Plover. She was born February 26, 1926 in Park Falls, the daughter of Wolfgang and Theresa (Kundinger) Radlinger. Her early life and schooling were in Park Falls. On August 5, 1944 she married Harold “Gene” Johnston. Philly spent most of her life as a home maker raising her two sons. She also wound rods for St. Croix Fishing Rods and worked in the kitchen at St. Anthony’s Catholic School. Sewing was her passion and she made the best dumplings in town. She is survived by: Her son: Howard Johnston of Park Falls Daughter-in-law: Marcella Johnston of Rudolph (2)grandchildren: Daniel Johnston Jr. of Kennan Laurie Ann (Jake) Luhtala of Park Falls (4)great-grandchildren Kati, Cassidy, John, Daniel, and Jerry (3)great-great-grandchildren Chase, Angel, and Madison (2)brothers: Rich Radlinger of King John (Carol) Radlinger of Michigan And many nieces, nephews, and other relatives and friends. She was preceded in death by her husband Harold “Gene”, her son Daniel, (3)sisters: Jeanette Hilgart, June Kelnhofer, and Marie Setterman, and (4)brothers: Alvin Sr., Mike, Joe, & Roman Radlinger. A memorial service will be held on Friday February 15, 2019 at 11:00pm from St. Anthony’s Catholic Church in Park Falls. Deacon Chet Ball will officiate. Burial to follow at Nola Cemetery in Park Falls. A visitation will be held on Friday February 15, 2019 from 10:00am until the hour of the service at the church. The Novitzke Funeral Home is assisting the family. www.novitzkefuneralhome.com

The family of Philomene "Philly" Johnston created this Life Tributes page to make it easy to share your memories.

Send flowers to the Johnston family.