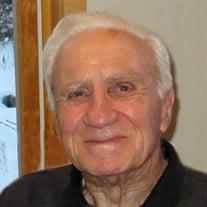 Park Falls (veteran) Perry T. Greenwood age 89, of Park Falls. He went peacefully to his heavenly home on Thursday March 26, 2015 at Flambeau Hospital in Park Falls. He was born on August 8, 1925 in Park Falls, the son of Harry and Eleanor (Perry) Greenwood. He graduated from Park Falls High School and received a scholarship to play football at the University of Wisconsin, Madison, but opted to serve his country in the United States Army during WWII. He received The Purple Heart after becoming wounded in action. He then returned to Park Falls and worked at Greenwood Storage and Transit Co. On April 10, 1948 he married Laura Mae “Chick” Verona and together they had 11 wonderful children. Perry and his father also operated a fuel delivery service for Phillips 66. He then worked for the City of Park Falls until retiring in 1989. He was a member of the Park Falls Fire Department, serving as the chief from 1969 until 1973. He also served on the City Council. Perry enjoyed athletics and loved watching his children and grandchildren participate in various sports. He is survived by: (10)children: Bonnie (Rick) Svehla Michael (Cindy) Greenwood Dan (Shannon) Greenwood Mary (Sam) Pritzl Carole (Rick) Ernst Tim Greenwood David (Julie) Greenwood Nancy (Jared) Wirsing Lisa (Bill) Hoffman Rob Greenwood (34)grandchildren, (31)great-grandchildren (2)sisters: Harriet Schlough Carole Freeman and numerous nieces, nephews, and other relatives and friends. He was preceded in death by his parents, his wife Laura in 2009, his son Tom, (2)grandsons, Jon Pritzl and Mitchell Wirsing, and (2)brothers: Gene and DeeDee. A memorial service will be held on Saturday May 9, 2015 at 10:30am from St. Anthony's Catholic Church in Park Falls. Fr. Shaji Pazhukkathara will officiate. Interment will follow at Nola Cemetery with military rites under the auspice the Park Falls American Legion and VFW Posts. A gathering of family and friends will be held on Saturday from 9:30am until the hour of the service at the church.

Park Falls (veteran) Perry T. Greenwood age 89, of Park Falls. He went peacefully to his heavenly home on Thursday March 26, 2015 at Flambeau Hospital in Park Falls. He was born on August 8, 1925 in Park Falls, the son of Harry and Eleanor... View Obituary & Service Information

The family of Perry T. Greenwood created this Life Tributes page to make it easy to share your memories.

Send flowers to the Greenwood family.