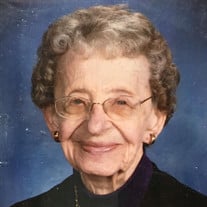 Mildred Ruth Rudolph Age 93, was taken to her heavenly home on December 20, 2019. Millie was born October 10. 1926 in Town of Hill, Ogema, Wisconsin to Mauno and Lempi (Muhonen) Niemi. Millie grew up in the Town of Hill, working beside her parents on the family farm. She was baptized and confirmed at St. Mark’s Lutheran Church in Ogema. She attended Leavitt Creek Grade School and graduated in 1944 from Westboro High School. After graduation she worked in the payroll department at Rayovac in Madison, Wisconsin. After one year in Madison, she returned home to Ogema to help on the family farm. Later, she moved to Medford to work at the Medford State Bank, working there for several years as a bank teller before retiring. On May 28, 1954, Millie married William “Bill” Rudolph, at St. Mark’s Lutheran Church in Ogema. Together they ran Rudolph’s Standard Station for many years. A son was born to them on May 2, 1956, named William Herman Rudolph Jr. He was their pride and joy, losing his life to an illness at the very young age of 21. In 1976, Millie and Bill moved to Cayuga Wisconsin, where they retired and built a cabin on their own from the ground up. There they fished, hunted and enjoyed nature and welcomed many friends and relatives as visitors. They lived off the land. During this time, they also took many trips to Canada for fishing and camping. That was what they really enjoyed. Millie was also a member of the Trinity Lutheran Church in Glidden and was a church organist and pianist for many years. After Bill’s death, Millie lived in Cayuga for two years before moving to the Hillside Village apartment in Glidden for two years. Later she moved to the Waterford in Park Falls, where she resided until her death with the care of Hospice. She is survived by: (2)sisters: Lillian Miller of Oshkosh Kathleen (John) Kloehn of Minocqua A brother-in-law: Robert (Janice) Werner of Marshfield (2)nephews: Randy (Sue Ellen) Miller Alan (Trina) Kloehn (2)nieces: Vanessa (Allen) Frederick Shelly (John) Antoniewicz (6)great-nieces: Fiona Frederick Hannah Kloehn Elizabeth Kloehn Alyssa Antoniewicz Kira Frederick Abigail Kloehn (3)great-nephews: Dalen Frederick Matthew Kloehn Ian Antoniewicz And many cousins and friends. She was preceded in death by her parents, her husband William, her son William Jr., and her brothers-in-law James Miller, Roy Rudolph, and Melvin Rudolph. Funeral services will be held at Trinity Lutheran Church in Glidden on Friday December 27, 2019 at 11:00am. Rev. Kenneth Lahners will officiate. A visitation will be held at the church on Friday from 10:00am until the hour of the service. Private burial will take place at Evergreen Cemetery in Medford at a later date. Millie’s family wishes to thank all of her caregivers who cared for her and loved her so much, especially the staff of the Waterford and Flambeau Home Health and Hospice. They would also like to thank all of her relatives and friends for all the visits and gifts brought to Millie over the last few years. God be with all of you. Novitzke-Birch Street Funeral Service is assisting the family. www.birchstreetfuneralservice.com

Mildred Ruth Rudolph Age 93, was taken to her heavenly home on December 20, 2019. Millie was born October 10. 1926 in Town of Hill, Ogema, Wisconsin to Mauno and Lempi (Muhonen) Niemi. Millie grew up in the Town of Hill, working beside her... View Obituary & Service Information

The family of Mildred Ruth Rudolph created this Life Tributes page to make it easy to share your memories.

Send flowers to the Rudolph family.