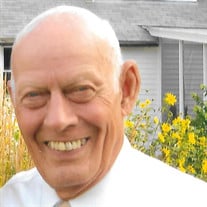 Michel S. LeDuc, 74, of Fifield, WI passed away on Tuesday, Oct. 18, 2016. He was born Nov. 24, 1941 in Manistique, MI to J.L. and Margaret (Sandberg) LeDuc. He graduated from Manistique High School and from Michigan Technological University in Houghton, MI in 1965. He married Dawn Wenzel on Sept. 30, 1967 in Rib Mountain, WI. He worked at various pulp and paper companies in Wisconsin, Minnesota, Maine and New Hampshire. In 1999 he retired from Fraser Paper Company in Park Falls, WI. He enjoyed spending time with family and friends and especially watching his grandchildren’s activities. His time was spent snowmobiling, grooming the trails, kayaking, hunting, and camping. In 2002 he took his dream RV trip to Alaska and also explored many other sights in the United States and Canada. Most summers were spent relaxing at the Silver Lake cabin. He was a member of the SnoDrovers & Eisenstein Bushwackers Snowmobile Clubs, Price County Snowmobile Trails Association and Fifield Congregational Church. He is survived by his wife of 49 years, Dawn; three children: Michel (Carol Harrison) S. LeDuc Jr. of New Hampton, New Hampshire, Christine (Scott) Landowski of Wisconsin Rapids, and Dale (Lisa) LeDuc of Beaver Dam; six grandchildren: Katherine (Ryan) Bruning, Pierce LeDuc, Lauren, Carson, and Kelsey Landowski and Emma LeDuc; one great-granddaughter, Piper Bruning; one sister, Margaret Vonciel LeDuc of Manistique, MI; and many other relatives and friends. He was preceded in death by his parents and his brother, Jan LeDuc. Funeral services will be held at 2 p.m. on Sunday, Oct. 30, 2016 at Fifield Congregational Church, N14234 W Central Ave, Fifield. Pastor Paul Dischler will officiate. Friends may call from 1p.m. on Sunday, Oct. 30, 2016 at the church until the time of service. Burial will be at a later date at Oak Hill Cemetery in Irma, WI. The Novitzke Funeral Home is assisting the Family.

Michel S. LeDuc, 74, of Fifield, WI passed away on Tuesday, Oct. 18, 2016. He was born Nov. 24, 1941 in Manistique, MI to J.L. and Margaret (Sandberg) LeDuc. He graduated from Manistique High School and from Michigan Technological University... View Obituary & Service Information

The family of Michel S. LeDuc created this Life Tributes page to make it easy to share your memories.

Send flowers to the LeDuc family.