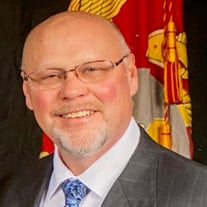 Mark Henry Weddig went to join our heavenly Father unexpectedly on April 26,2021 He as born on December 26, 1962 in Fond du Lac, Wisconsin to Henry and Caroline (Brabender) Weddig. He was predeceased by his maternal and paternal grandparents (Hattie and Henry Weddig and Sylvia and Eugene Brabender), his mother Caroline and sister Sandy. He is survived by his wife of 10 years Colleen (Sander) Weddig, father Henry Weddig (Patti Moeller), daughter Anna (Peder) Kling of Ash Fork, Arizona, stepson Marine Gunnery Sergeant Ian W. (Heather) Merritt of Hubert, North Carolina. His five grandchildren were the treasures and joy of his heart. William (5), Nathanial (3), Micah (17 mos.) Kling, and Isabell (10) and Jersey (7) Merritt. His face would light up and pictures would be shown as soon as anyone asked about them. He is also survived by his close and wonderful family, Steve (Kathy) Weddig, Tammy (Larry) Hoeft, Dan (Pam) Weddig, Diana (Tom) Stahla, and Mary (Mark) Olson. He was so very proud of all his many nieces and nephews, grand nephews and grandnieces and all the amazing paths they have taken in their lives. He was honored to be the godfather to Malachi Cate, Tate Cameron and Magen Wendt. And also, a very special person, Mary Wendorf, Anna’s mother. Mark graduated from Waupaca High and went on to work at the Central Wisconsin Environmental Station (CWES). Here, his talents in teaching took root and he found a passion for education. He was encouraged to attend the University of Wisconsin-Stevens Point and received a degree in Natural Resource Management. Inspired to teach youth to “reach for their dreams” and strive for excellence in every area of life, Mark and Mary moved to Alaska where he was the Director of Trailside Discovery Camp run by the Alaska Center for the Environment. While he was there the Exxon Valdez disaster happened and he dedicated his time and efforts to cleaning up shorelines and washing oil from otters and other unfortunate animals. He returned to Wisconsin to work at Bethel Horizons and Ernie Swift Youth Camps while raising his daughter, Anna Kling. At the same time, he was continuing his education to get his masters in education. He went on to teach for over a decade at Merrill Area Public Schools. His next step in his journey was to become the Assistant Principal at Black River Falls High School. The final stop in his quest to reach and help as many young minds in positive ways as he could was to take on the position of District Administrator. He moved to the “Weddig resort” on beautiful Butternut Lake where he thanked God every morning for bringing him to such a glorious creation in the Northwoods. He touched so many lives along the way and he was always humbled and amazed when a past student or educator would tell him that he was the reason they went on to be so successful and to follow the career path they did. Mark loved everything Wisconsin sports. He was a season ticket holder for the Green Bay Packers and could tell you any past/present players names or what a play was and when it happened and what the score of the game had been. He also held season ticket for Badger Hockey, a sport he loved having both played and coached it in the past. His grandsons called him “Grandpa Hockey Boom”. An annual trip to a Milwaukee Brewer’s game was a must and he loved sitting on the deck overlooking the lake and listening to Bob Eucher call the games. He enjoyed anything and everything outdoors, hiking, snowshoeing, cross country skiing, fishing, boating, canoeing, and kayaking. As long as he was outside and could take in the smells and sounds of God’s amazing creations he was at peace. Mark’s faith and passion for our Savior carried him through every day and his entire life. He as an active member and Elder of Peace Lutheran Church in Park Falls, Wisconsin and also a longtime member of the Lions Club and would always volunteer for anything that needed or benefited a person or the community. He will be extremely missed by all who knew and loved him for the wonderful, caring and intelligent man he was. A celebration of life will be held at the Park Falls American Legion, 274 3rd Avenue North, Park Falls, Wisconsin from 12 to 4 on Saturday May 1st, 2021 with the service at 1:00pm with Pastor Pheil officiating with special homily presented by his son in law, Pastor Peder Kling. Please feel free to bring and share any stories of Mark and how he touched your life. In lieu of flowers a scholarship fund for students going on to become a teacher has been established at Forward Bank in Park Falls, Wisconsin. Donations can be sent directly to Forward Bank at 110 2nd Avenue North, Park Falls, WI 54552 and designate as “Mark Weddig scholarship” or sent to Colleen so she can take care of the depositing of the donation. Mark would tell us all to move forward, love life to it’s fullest, and live every day for the glory of God, to love one another and be kind and patient to everyone.

Mark Henry Weddig went to join our heavenly Father unexpectedly on April 26,2021 He as born on December 26, 1962 in Fond du Lac, Wisconsin to Henry and Caroline (Brabender) Weddig. He was predeceased by his maternal and paternal grandparents... View Obituary & Service Information

The family of Mark Henry Weddig created this Life Tributes page to make it easy to share your memories.

Send flowers to the Weddig family.