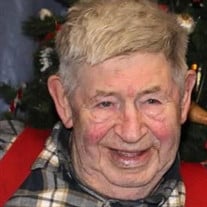 Leonard Carl Diestelhorst, age 87 of Glidden, died Friday, December 3, 2021 at Park Manor Nursing Home. He was born on February 14, 1934 in Rib Lake, the son of Otto and Marie (Fischer) Diestelhorst. On December 1, 1973 he married Janet Kicherer. Together they raised a family in Glidden. Leonard worked as a logger in his early years and later he labored many years as a machinist at Lionite Hardboard Wood Products in Phillips. After retiring from Lionite, he worked at Park Falls BP as a cashier. He loved fishing, polka dancing, playing cards, listening to the Brewers on the radio, and taking his beloved wife on long drives in the country. He especially loved spending time with family and friends. He is survived by his wife Janet of Park Falls and son Clint (Kari) Diestelhorst of Brookfield, (7) step-children: Larry Robinson of New London, Bruce (Terry) Robinson of Weyauwega, Linda (Randy) Edinger of Two Rivers, Lorraine (Chuck) Butler of Wonder Lake, IL. Ben (Melodie) Robinson of Washburn, Randy Robinson of Park Falls, and Margaret Salerno of Glidden. (17) grandchildren, (10) great-grandchildren, (5) siblings: Linda (Ed) Palecek, Marian (Denis) Shaver, Alice Nutting, Vern (Joanne) Diestelhorst, and Leona Vande Vrede, and numerous nieces, nephews, and other relatives and friends. He was preceded in death by his parents and sister Erna (Don) Loomis. A Memorial Service will be held at Birch Street Funeral Service Chapel on Saturday January 8, 2022 at 11:00am. Deacon Chet Ball will officiate. A Visitation will be held at the funeral home on Saturday from 10:00am until the hour of the service. Interment will take place at a later date. Birch Street Funeral Service is assisting the family. www.birchstreetfuneralservice.com

The family of Leonard Carl Diestelhorst created this Life Tributes page to make it easy to share your memories.

Send flowers to the Diestelhorst family.