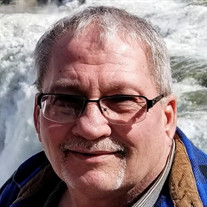 Laddie E Franciskovich age 64, of Butternut, passed away in his sleep at Park Manor on Sunday, January 13, 2019 after a battle with cancer. Laddie was born on December 24, 1954, in Ashland, Wisconsin to Valerie (Haefs) and Frank Franciskovich. He graduated from Glidden High School in May of 1973. He enlisted in the Marine Corps soon after graduation and was honorably discharged in 1974. He graduated from WITC in Ashland with an automotive degree. He furthered his education with a business degree in 2003 from WITC in Ashland. Laddie worked in multiple fields during his adult life. He was an auto mechanic, business owner, over the road truck driver, a member of the Ashland County Highway Department and an EMT with Great Divide. Laddie enjoyed fishing, hunting, and collecting coins. He drove stock car and motorcycles at earlier times in his life. He loved to work on his yard making it bigger each year. He was happiest when both of his daughters and grandchildren were all together. Laddie is survived by 2 daughters, Tina Kennedy of Meridian, ID and Sara (Mike) Lucas of Cameron, WI; His grandchildren Sydney and Tyson Lucas of Cameron, WI. His brother Bill Franciskovich of Red Wing, MN; his sister Debbie Rozelle of Gile, WI; his uncle Tom (Jodi) Haefs of Stillwater, MN and various cousins. He was preceded in death by his father, Frank Franciskovich and mother Valerie Synkula. A Celebration of Life will be held Saturday, January 19, 2019, at the VFW in Glidden, WI from 1pm to 4pm. Military honors will be held at 1:30pm with a Sharing of Memories at 2:00pm. A special thank you to Regional Hospice, Flambeau Area Hospice and Park Manor. Your care was amazing and appreciated. The Novitzke Funeral Home is assisting the family. www.novitzkefuneralhome.com

Laddie E Franciskovich age 64, of Butternut, passed away in his sleep at Park Manor on Sunday, January 13, 2019 after a battle with cancer. Laddie was born on December 24, 1954, in Ashland, Wisconsin to Valerie (Haefs) and Frank Franciskovich.... View Obituary & Service Information

The family of Laddie E. Franciskovich created this Life Tributes page to make it easy to share your memories.

Send flowers to the Franciskovich family.