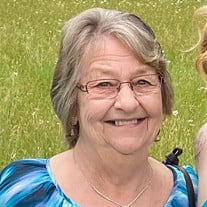 Kay B. Michalski age 76, of Park Falls, died on Tuesday March 1, 2022 at her daughter Marie’s home in Phillips. She was born on October 12, 1945 in Milwaukee, to the late John and Bernice (Zernia) Schulz. In 1963 Kay married Arnold Michalski. Arnold and Kay owned and operated The Ark Kennels in Fifield until Arnold’s passing in 1974. She later married Scott Barylski. Scott and Kay owned and operated the Park Falls Radio Shack. After closing Radio Shack, Kay worked for Pamida/Shopko for many years until her retirement. Kay enjoyed gardening, bird and wildlife watching, and had many pets over the years. She loved spending time with her family and friends, especially her grandchildren. She is survived by her children: Mark (Janice) Michalski of Wausau, Marie (Michael) Spanjer of Phillips, Matthew (Linda) Michalski of Park Falls, DJ (Robert) Bucheger of Lewisburg, TN, and Scott Barylski of Ashland; grandchildren, Sheila (Cameron) Coffman, Wayne (Britney) Schnautz, Kelly (Dave Curtis) Schnautz, Arnie Spanjer, Racheal (Cory Weiler) Bucheger, Jakob Bucheger, Harvey Barylski, Neil Barylski and Ben (Jenny) Barylski, and many great-grandchildren, foster children, nieces, nephews, and other relatives, friends and her loving Cat . She was preceded in death by her parents, John and Bernice, her first husband Arnold, her second husband Scott, her granddaughter Jackie, and brothers Robert and Karl. A memorial service will be held at the Family Worship Center on Saturday March 26, 2022 at 11:00am. Pastor Terry Wilson will officiate. A visitation will be held one hour prior to the service. Interment will take place at Nola Cemetery at a later date. Birch Street Funeral Service is assisting the family. www.birchstreetfuneralservice.com

The family of Kay B. Michalski created this Life Tributes page to make it easy to share your memories.

Send flowers to the Michalski family.