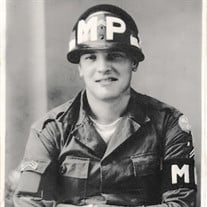 Jerome Joseph Woodie, age 93, of Park Falls, passed into eternal peace early morning on Thursday March 3, 2022 at Rib Lake Health Service Nursing Home in Rib Lake of natural causes. He was born on December 9, 1928 in Park Falls, the son of Joseph Edward and Mary Agnes (Wallner) Woodie. He worked on the family farm and did logging with his father and brothers in the pine forests of Price County as a young man. Being drafted, Jerry was inducted into the US Army Jan 3, 1951. Jerry served in the Korean War as a Military Police Sergeant and returned in Dec of 1952. He received 3 Bronze Campaign Stars along with his Korean Service Medal upon his honorable discharge. After returning to Park Falls, Jerry was employed at Flambeau Paper Mill as a duplex trimmer for 30 years and then at Wonder Wash car wash in Park Falls. He enjoyed working around the yard at his home on 4th Ave South in Park Falls and drawing pencil sketches of farm scenes, horses, and people. Jerry Woodie is survived by his sister Irene Spoerl and brother Raymond (Merida) Woodie, both of Park Falls, nieces Sandra Teske, Linda Woodie, Karen Rini., Sharon Wundrow, Teresa Caprali, Gail Fewtrel, Marie Furrer, and nephews: Joseph Rickert, Stanley Rickert, Scott Rickert, Robert Spoerl, Gary Woodie, Gene Zoesch, Patrick Zoesch and Joe Woodie, along with other relatives and friends. He was preceded in death by his parents, brothers: Richard, Clarence, Clifford, and infant brother Michael, sister, Marian Zoesch, and niece: Geraldine Woodie, and nephews Phillip Woodie, Michael Zoesch, and Paul Woodie. A graveside service is being planned at Nola Cemetery this spring or summer where he will be honored as a Veteran with full military honors. Watch for an announced-on the Facebook page – “You Know You Are From Park Falls” or Birch Street Funeral Service website and Facebook page for all who wish to attend. Condolences may be sent to Irene Speorl, 1175 South Third Avenue, Apartment 11, Park Falls, WI 54552 Birch Street Funeral Service is assisting the family. www.birchstreetfuneralservice.com

The family of Jerome Joseph Woodie created this Life Tributes page to make it easy to share your memories.

Send flowers to the Woodie family.