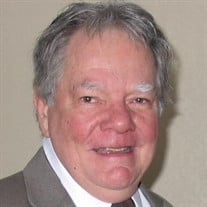 James Walter Roberts Age 81, of Fifield, formerly of Davenport, Iowa, died on Wednesday November 6, 2019 at Flambeau Hospital in Park Falls. He was born on July 8, 1938 in Davenport, Iowa, the son of James Merida and Alice (Homeyer) Roberts. After graduating from high school in Davenport, James entered the United States Air Force, serving as a Radiology Technician in Japan. He then earned his Bachelor of Arts from St. Ambrose College in Davenport. James was the Administrator of the Radiology Department at Mercy Hospital in Davenport, Iowa for many years before he retired in 1994. On May 26, 2001 he married Marilyn Kisch-Payne. The couple moved to Fifield in July of 2002. James loved fishing, hunting with his dog Chaucer, gardening, making firewood and spending time on his computer. He is survived by: His wife Marilyn of Fifield His daughter Peggi Roberts of Davenport, Iowa (2)step-children: James (Sara) Payne of St. Paul, MN Alex (Emily) Payne of Chillicothe, IL (5)grandchildren: Adam Bieber of Davenport, IA Holly (Joe) Akers of Hanover, VA Aaron Payne of Chillicothe, IL Harper Payne of St. Paul, MN Sienna Payne of St. Paul, MN (1)great-granddaughter: Julie Rose Akers of Hanover, VA His sister Alice Roberts of Lebanon, OR And many other relatives and friends. He was preceded in death by his parents, his first wife Bernadine, and his daughter Julie Bieber. A private service will be held. Novitzke-Birch Street Funeral Service is assisting the family. www.birchstreetfuneralhome.com

The family of James Walter Roberts created this Life Tributes page to make it easy to share your memories.

Send flowers to the Roberts family.