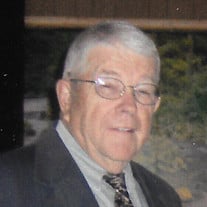 The Reverand James Angus Patterson, age 86, went to be with his Lord and Savior, Jesus Christ, on Sunday, January 31, 2016. James was born on June 30, 1929 in Fifield, Wisconsin, the son of Alexander and Laura (Warren) Patterson. He graduated from Fifield High School in 1947. James then attended Northwestern Bible School in Minneapolis, Minnesota. He graduated with a diploma in Bible Studies. While attending school in Minneapolis he met the love of his life, Eileen Elizabeth Tollefsen. They were married in Zion, Illinois on July 29, 1949. Two years later they moved back to Fifield, when James took over the family farm. In 1965 he was called into the ministry and was accepted into Hiawatha Baptist Missions. His first church was in Brillion, Wisconsin starting in 1967. He also pastored churches in Woodruff, Wisconsin from 1975 - 1980; Swan Valley, Montana from 1980 - 1989; and Manitowoc, Wisconsin from 1990 until his retirement in 1993 at which point they moved back to Fifield again. After retirement he continued to do pulpit supply as often as he could. In November, 2015 they were honored for 50 years of service with Continental Baptist Missions. In his spare time he enjoyed hunting, gardening, making maple syrup, and loving the outdoors. Indoors he loved to read Louis L' Amour Westerns, anything about the Packers, cooking, and being with his family. He is survived by his devoted wife of 66 years, Eileen, his loving children, Jef (Iva) Patterson, Hastings, Michigan; Barbara Patterson, Appleton; Dik (Colleen) Patterson, Park Falls; Faith (Steve) Cochrane, Appleton; and Steve (Jessica) Patterson, Tomahawk. He is also survived by 10 grandchildren: Jasmine Woods, Trevor and Christian Patterson; Timothy, Cynthia, and Matthew Patterson; Andrew and Kaitlin Cochrane; Marcus and Vanessa Patterson; eight great grandchildren, one sister, Joyce Donaldson; one brother, Wilson (Bonnie) Patterson; one sister-in-law, June Patterson, numerous nieces and nephews, other relatives and friends. He was proceeded in death by his parents, one brother, Linton; four sisters, Dorothy Aiken, Martha and Lorraine Patterson, Jean Lindgren; and one grandchild, Nicolas Ryan Patterson. Visitation will be held in Park Falls, at Novitzke Funeral Home from 5:00 to 7:00 pm on Friday, February 5, 2016. Services will be held at Woodruff Baptist Church, Woodruff, Wisconsin on Saturday, February 6, 2016 with visitation from 10:00 to the time of service at 11:00 A.M. A luncheon will be served following the service. Burial will be at a later date.

The Reverand James Angus Patterson, age 86, went to be with his Lord and Savior, Jesus Christ, on Sunday, January 31, 2016. James was born on June 30, 1929 in Fifield, Wisconsin, the son of Alexander and Laura (Warren) Patterson. He graduated... View Obituary & Service Information

The family of Rev. James Angus Patterson created this Life Tributes page to make it easy to share your memories.

The Reverand James Angus Patterson,
age 86, went to be with...

Send flowers to the Patterson family.