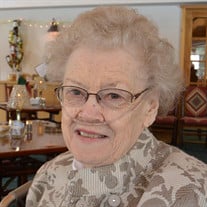 Irene Lenore Nelson Schluter, 89 a longtime resident of Park Falls, passed away peacefully in her sleep at Pleasant View Nursing Home in Phillips, Wisconsin. Irene was born in Elbow Lake, Minnesota, December 17, 1925. She was the second daughter born to Anton and Inez Nelson. Irene was a graduate of Elbow Lake High School and had happy memories of her childhood there. On June 14, 1947, Irene married Gordon Schluter and for 56 years they worked hard together to achieve the “American Dream” of self-sufficiency. Irene’s desire to attend college was realized when they moved to Albuquerque, New Mexico. She earned her RN degree at the University of Albuquerque at the age of 51. Irene had many interests including restoring antique furniture, lacework and crocheting. She was an avid reader and was surrounded by books galore. She played bridge with her friends often and was not too humble to enjoy a good hand. She was a resource for questions regarding china and dinnerware. It was difficult for her to pass up a pretty plate. But no interest surpassed Irene’s love and passion for her family. She conveyed this love in many ways, all of which are forever appreciated by her family. Irene is survived by her four children, Pamela Smylie (John), Paul Schluter, Jeff Schluter (Karen), and David Schluter. She especially enjoyed her grandchildren Jonathan (Bridget) Smylie, Krysta (Tim) Zell, and Greta Smylie, and the younger three grandchildren Hunter, Megan, and Elsa Schluter. Irene considered herself blessed with her two great grandchildren Craig and Evelyn Smylie. She is also survived by her older sister, Marjorie Elaine Sandvold, of Minneapolis, Minnesota. She is preceded in death by her parents, her husband, Gordon, on April 8, 2005. The family would like to extend sincere gratitude to the staff of Regency House and Pleasant View Nursing Home in Phillips. Mom’s care was professional, heartfelt, and beyond expectations. We appreciate the individualized attention offered by all caregivers. In lieu of flowers, we would request donations to go to the Regency House or Pleasant View Nursing Home in Phillips, Wisconsin. A memorial service, will be held on Monday July 20, 2015 at 11:00 AM at the Novitzke Funeral Home in Park Falls. Pastor Keith Vik, will officiate Visitation will be held on Monday July 20, 2015 at 10:00 am until the hour of service at the Funeral Home. Place of internment will be in Sedan, Minnesota alongside her husband Gordon at a later date. The Novitzke Funeral Home is assisting the Family

The family of Irene Lenore Schluter created this Life Tributes page to make it easy to share your memories.

Send flowers to the Schluter family.