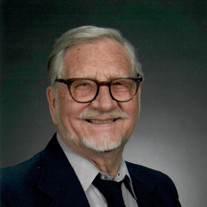 Hans Brendalen, son of Christ and Helga Brendalen, was born September 25, 1925 near Lillihammer, Norway. When Hans was three years old he came across the ocean to Ellis Island along with his mother and older brother John. There they met up with husband and father Christ, who had come to America two years previously. They ended up on a small farm in Weme, Minnesota. Hans was the second of seven children. He attended a country school where he learned to speak English rather than his native Norwegian. He was an excellent ice skater and skier. During his teen years he worked on the Masabe Iron Range in Hibbing, MN. When he was old enough, he enlisted in the U.S. Navy. He had various jobs on ship, from guarding the huge gun in the stern, working in the kitchen, as well as serving as fireman in the hold of the ship. He was stationed in Guam, during part of WWII. When the air raid sirens went off, signaling the troops to take over, Hans would stay in his cot, and say “You have nothing to fear, but fear itself.” When he came back home to Clearbrook, MN, his brothers saw him walking up to the farm, and commented that he was as brown as the gravel road! Quite an achievement for a fair-skinned Norwegian. He met Eleanora Bauer in Minneapolis on his way home. He had been pick-pocketed and had no money to buy a bus ticket. So, he borrowed $20.00 from the dark-haired young lady he met on the sidewalk. Hans got Eleanora’s address, promising to pay her back. The rest is history! They were married September 27, 1947. They lived in Milwaukee, WI, where Hans was employed at Harnischfeger greasing the enormous industrial machines, and also for Schlitz Brewing Company. Two sons were born to Hans in Milwaukee, Arnold and Edward. Tired of the hustle and bustle of the city, this country-oriented couple moved to a small farm on the Chippewa River in Glidden, called the Mackinburg. Another son, David was born and a daughter, Donna at this time. The Brendalen family moved to a bigger farm, the Hentgartner place, where Michael was born, completing their family. Hans was a lumberjack, farmer, politician, and carpenter. He bought old houses, remodeled them, and rented them out. He served as Commander of the local VFW for a number of years. He was town chairman and the road grader operator for 12 years. He was active in the church, enjoyed talking with people, was always reading, learning and growing. He enjoyed life and nature, and was happiest when he was working in the woods cutting down trees! He used to joke that he had sawdust in his veins! Hans died on Saturday March 7, 2020 in Park Falls. Left to cherish his memory are his wife Eleanora of Park Falls, (5)children: Arnold (Margie) of Appleton, Edward (Leanne) of Butternut, Dave of Ashland, Donna (Mark) LaDue of Canton, SD, and Michael of Boston, KY, (9)grandchildren, (10)great-grandchildren, and (1)great-great-grandchild. Also his siblings: John (June) Brendalen of Clearbrook, MN, Arnold (Beverly) Brendalen of Mora, MN, Erling (Betty Lou) Brendalen of Skidmore, TX, Martha Ahles, and Christine Strande, both of Bemidji, MN. Hans was preceded in death by his parents and one brother Anton Brendalen. A memorial service will be held at Trinity Lutheran Church in Glidden on Thursday March 12, 2020 at 11:00am. Rev. Kenneth Lahners will officiate. A visitation will be held at the church on Thursday from 10:00am until the hour of the service. Birch Street Funeral Service in Park Falls is assisting the family. www.birchstreetfuneralservice.com

Hans Brendalen, son of Christ and Helga Brendalen, was born September 25, 1925 near Lillihammer, Norway. When Hans was three years old he came across the ocean to Ellis Island along with his mother and older brother John. There they met up... View Obituary & Service Information

The family of Hans Brendalen created this Life Tributes page to make it easy to share your memories.

Send flowers to the Brendalen family.