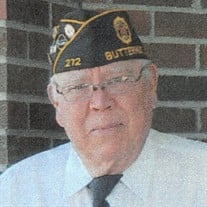 George Charles “Sonny” Morris, Age 83 died on June 20, 2021. He was born November 13, 1937, in Bastrop, LA. Son of Clellon and Lettie Mae (Wilhite) Morris. He was married to Kazuyo and divorced in 1985. Married Janet Cermak Gulledge on March 27, 1986. They lived in Downsville, LA, Medinah, IL, and Butternut, WI. He served in the Army National Guard and Navy during the Korean War. A member of the American Legion Post 272 in Butternut and was a Service Officer. Worked on the Alaskan Pipeline, owned a gas station, a machine shop, a mechanic for over 40 years and enjoyed hunting, fishing, and getting together with friends playing guitar. Owned and operated a logging truck, drove semi-trucks all over the U.S. and Canada and a tanker truck filled with milk for a big farm in WI. Preceded in death by his parents and sisters, Joyce (Robert) Richardson and Jean (Rodney) Killcrease. He is survived by wife Janet, and many nieces, nephews, and cousins. Funeral Services will be held on Friday, June 25 at 11:00am at the Butternut American Legion Post 272. A visitation will be held from 9:00am until the hour of the service at the Legion Post. Private interment will take place at Union Cemetery in Butternut at a later date. In lieu of flowers, please donate to: American Legion Post 272. P.O. Box 22, Butternut, WI 54514. Birch Street Funeral Service is assisting the family. www.birchstreetfuneralservice.com

The family of George "Sonny" Charles Morris created this Life Tributes page to make it easy to share your memories.

Send flowers to the Morris family.