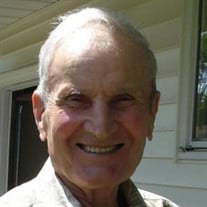 Frank R. Wagner Age 91, of Park Falls, was peacefully called to be with the Lord at his home on Saturday February 2, 2019, with the love of his life by his side, his children, and his faithful companion “Tilly”. He was born on March 13, 1927 in the Town of Lake, the son of Joseph and Anna (Pichler) Wagner. Frank was raised in Butternut, growing up on the family farm in the town of Chippewa. Frank was a fixture in the Park Falls community throughout his life. He served as president of the St. Anthony’s School Board, was a member of the Knights of Columbus, a City of Park Falls Councilman, a member of the Park Falls American Legion and VFW Posts with his mural proudly depicted on the wall of the American Legion Hall. All who met him will remember his kind presence and smile, especially with his dedication to Valley Laundry where he enjoyed interacting with locals and tourists from around the area. Frank served in the United States Army during the Korean War and married his love Betty Fleming after his return on November 29, 1952. The shared 66 years together. Frank loved his family deeply and our extended Weiberg family. In 2013 he participated in the Never Forgotten Honor Flight to Washington DC. He is survived by: His wife Betty, (6)children: David (Ruth Burhans) Cathy (Alf) Melby Dan (Cindy) Wagner Mark (Laurie) Wagner Greg (Diane) Wagner Mary (Greg) Wirsing, all of Park Falls (22)grandchildren, (33)great-grandchildren (2)brothers: Edward (Sheila) Wagner of Woodruff Louis Wagner of Park Falls and many nieces, nephews, and other relatives and friends. He was preceded in death by his parents, (4)brothers: Joseph, John, William, and Leonard Wagner, (3)sisters: Mary Ann Bucheger, Theresa Zimmerman-Anderson, and Rose Differt. (3)brothers-in-law: Ray Bucheger, Eugene Zimmerman, and Donald Anderson, and (3)sisters-in-law: Marge, Mary, and Kathy Wagner. A Celebration of Life will be held on Saturday February 9, 2019 at 11:00am at St. Anthony’s Catholic Church in Park Falls. Deacon Chet Ball will officiate. Internment will take place at St. Cecelia Catholic Cemetery in Butternut with military honors under the auspices of the Park Falls American Legion and VFW Posts. A visitation will be held at the church on Saturday from 9:30am until the hour of the service. The Novitzke Funeral Home is assisting the family. www.novitzkefuneralhome.com

Frank R. Wagner Age 91, of Park Falls, was peacefully called to be with the Lord at his home on Saturday February 2, 2019, with the love of his life by his side, his children, and his faithful companion &#8220;Tilly&#8221;. He was born on March... View Obituary & Service Information

The family of Frank R. Wagner created this Life Tributes page to make it easy to share your memories.

Send flowers to the Wagner family.