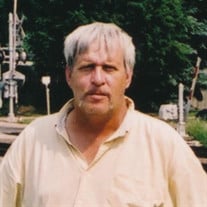 Eugene “Gene” A. Darrow Gene, 73 of Elgin, Illinois passed away peacefully Tuesday, November 24, 2020. He was born October 12, 1947 in Park Falls, Wisconsin, to Mary Louise (Heyel) and Roy Darrow. His childhood and most of his schooling were spent in Park Falls where he developed many lifelong friendships. While in high school, Gene moved to Elgin, Illinois, where he lived until he passed away. After serving in the US Marine Corp, he married Barbara Helmuth in Park Falls in July 1968, they later divorced, and remained friends. During his childhood, Gene developed a love of model trains, and a favorite pastime of his after retirement was train watching. One of his most memorable trips was taking the train from Chicago to Glacier National Park in Montana. Other than trains, researching family history was a hobby Gene enjoyed. He was quite the sleuth when exploring a genealogy clue, and kept at it until he found what he was looking for. Gene enjoyed the camaraderie of the friends he made while in the Marines; and loved swapping stories and reminiscing with them. Gene leaves behind his children, Bryan Darrow of Elgin, Il, and Mari Darrow of Chicago, and his much loved granddaughters, Carson (William Alexander) Dempsey, and Abagail Darrow. He is also survived by his sisters, Debra (Rick) Poetter of Spokane, WA, and Kimberly (Chuck) Hirtreiter of Park Falls, several nieces, nephews, other relatives and many friends. A burial service will be held at a later date, with inurnment at Nola Cemetery.

The family of Eugene "Gene" A. Darrow created this Life Tributes page to make it easy to share your memories.

Send flowers to the Darrow family.