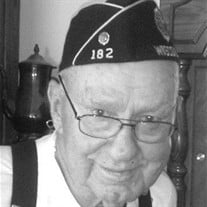 Ervin R. Faltinosky, 93, passed away peacefully at Flambeau Hospital in Park Falls on April 12, 2017. He was born in Butternut, on May 10, 1923, the son of Frederick and Mary Faltinosky. He completed 8th grade at the Boness country school on the Price and Ashland County Line. At age 19, he was drafted into the United States Army during World War II and served 18 months overseas in the China-Burma-India Theater under General Stillwall to continue the campaign of the Merrill’s Marauders. There he spent six months in India, nine months in Burma, and three months in China. After returning from the war, Erv moved to Libertyville, Illinois where he found employment with International Harvester for 31 years. Upon retirement, he moved back to the Park Falls area and was fortunate to meet the love of his life, Alice Morey of Phillips, WI. Together, they spent 20 years traveling throughout the United States and to Italy and Mexico. They also enjoyed polka dancing and spending time at their “hide out” on the South Fork of the Flambeau River. In the past seven years, Erv would have been seen visiting many of the local establishments, including the Frontier Restaurant or Park Falls Family Restaurant in the morning for coffee and going out for lunch throughout Price County, followed by happy hour either at AJ’s or MT Pockets. Many friends and acquaintances would have the pleasure of listening to one of his stories about the past 100 years. Erv is preceded in death by his son, Thomas Faltinosky, Alice Morey, his parents Frederick and Mary Faltinosky, brothers Walter, Theodore (Susan), Edward (Ann), Harry, Raymond (infant) and sisters Freida (Norman) Drexler and Irene (Donald) Schultz. Erv is survived by his grandson, Randy (Debbie) Faltinosky and great grandchildren, Tyler and Kaitlyn Faltinosky of Las Vegas, Nevada, sister Mildred (John) Haegerl of Butternut, numerous nieces and nephews, and special friends Becky, Megan and Emily Mader. Funeral Service will be held on Monday April 17, 2017 at 11:00 am at St. Paul's Lutheran Church in Butternut. Pastor John A. Deitz will officiate. Visitation will be held on Monday April 17, 2017 at 10:00 am until the hour of service at the church. Burial will follow at Nola Cemetery with Military Honors under the auspices of the Park Falls American Legion and the VFW Post. This obituary was written by Ervin himself. The Novitzke Funeral Home is assisting the Family

Ervin R. Faltinosky, 93, passed away peacefully at Flambeau Hospital in Park Falls on April 12, 2017. He was born in Butternut, on May 10, 1923, the son of Frederick and Mary Faltinosky. He completed 8th grade at the Boness country school... View Obituary & Service Information

The family of Ervin R. Faltinosky created this Life Tributes page to make it easy to share your memories.

Send flowers to the Faltinosky family.