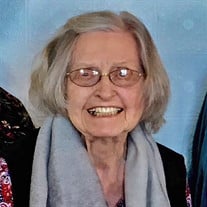 Elvira V (Dolly) Gregor Kenney All Good Things come to an end. Elvira V (Dolly) Gregor Kenney closed her eyes and passed peacefully, without a sound, on March 14, 2019, three weeks before her 107th birthday. She will be missed! Dolly was born in Minneapolis Minnesota on April 4, 1912, the first child of Gunhild Marie (Olson) and Joseph J Gregor. She was ten days old when the Titanic sank … the first of more than a century filled with Historic Moments. When Dolly was a toddler her Mom and Dad moved to a farm near Lyndon Station in Southern Wisconsin owned by her father’s mother. There, her four siblings were born. She reminisced in later years about the twig-room homes she and her sisters created under the apple trees, the young man who drove over in a horse-drawn farm wagon to tell each neighbor he was headed for the Trenches in World War I, the batches of bread her dad baked after her Mom died during the 1922 flu epidemic, the “tin lizzy” she and sister Peggy drove “over the fields” to barn dances. As a young woman, Dolly moved to Milwaukee where she worked in the office at Express Freight Lines, had her first date with Richard (Dick) Kenney at the Pfister Hotel, married at Gesu in 1943, was wheeling infant daughter Kathleen in her baby buggy the day FDR died in 1945, and later enjoyed toddler son John’s excitement when he saw his first Big Digger (“Clancy”) at a Milwaukee construction site. In 1949, Richard and Dolly moved to Mellen WI, where they lived for the next ten years in the house Richard had grown up in. In 1954, while pregnant with youngest son Tom, Dollyconverted from Lutheran to Catholic. In 1959, Richard was working at St Croix Rods, built a home on Paddock Avenue and Dolly’s sixty year connection to St Anthony’s parish began. It continued to her death. She was a member of St Anthony’s Christian Women and Catholic Daughters (served as Regent of the Park Falls Court). Beginning in the early 1960’s, Dolly worked as a Receptionist at Flambeau Hospital. She thrived on the opportunity to assist patients, their families and Hospital staff in challenging situations. As a result she was asked to train new office staff as they came on board. She was civic-minded: a member of the American Legion Auxiliary, Park Falls Hospital Auxiliary (including volunteering at the Auxiliary Thrift Shop for many years), the Quilting Club, the National Nordic Museum in Seattle, Wisconsin PublicTelevision. She enjoyed Golf and socializing at the Park Falls Country Club. One of her favorite 100 year gifts (along with a Papal Blessing) was a pin flag from golfer Phil Mickelson. Dolly loved flowers … growing them, making bouquets, creating Summer planter boxes. She treasured friends, and corresponded for decades with relatives, friends she made as a young woman and friends she made later in life. Richard passed in 1980, after enjoying a few years of retirement from the Flambeau Paper Mill. In 1983 Dolly married Earnest (Ernie) Skotterud who had also been widowed. Thus began 12 years of Snow Bird Time, most often in Arizona. She also travelled to Europe with other members of Catholic Daughters, and to Norway. After Ernie’s passing in 1995, Dolly remained with us for another 24 rich years, the last four of them at Park Manor. Dolly is survived by her daughter Kathleen (Keith Stamm), her son John (Donna Ryskey Kenney), four grandchildren, seven greatgrandchildren, nine nieces and three nephews, her sister-in-law Shirley Gregor, Ernie’s children Jim, Judy (Richard Lambert), Jill (William Eckblad), John (Clo), Joyce (Keith Hildebrand) and their families, and generations of extended famiies and friends. In addition to her two husbands, Dolly was predeceased by her siblings Katherine (Kate), Margaret (Peggy), Marie and Donald (Sonny), half-brother Frank Gregor, son Tom (Brynda Kenney Wilson) and grandson John Kenney II. Her Celebration of Life is scheduled for Saturday, June 22, 2019 at St Anthony’s Catholic Church in Park Falls: Visitation at 10 am followed by Mass at 11 am, The Family would like to express their gratitude to all the family members and friends who visited, called, sent cards and treats so faithfully; Fr Sahji and Deacon Chet Ball; her physicians and the entire staff of Park Manor. Should you wish to make a donation in her honor, the family suggests St Anthony’s Catholic Church in Park Falls WI, or a charity of your choice.

The family of Elvira "Dolly" Kenney created this Life Tributes page to make it easy to share your memories.

All Good Things come to an end....

Send flowers to the Kenney family.