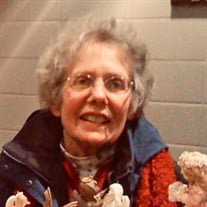 Elizabeth (Betty) Jarosinski April 12, 1942 - March 15, 2020 Betty Jarosinski passed away peacefully on Sunday, March 15, surrounded by her family at St. Clare’s Hospital in Weston, Wisconsin. Betty lived an extraordinary life, marked by faith, hard work, hope, humility, and service to others. She was born in Indianapolis, the daughter of Emet and Genevieve Talley, and always had a special place in her heart for her friends and family in the Hoosier State. She studied English at Marian College, received her MA in English at Indiana University, and taught at Manual High School in Indianapolis before moving to Park Falls in 1967. In addition to raising her large family, Betty soon became active in the community and would go on to teach the fifth and sixth grades at St. Anthony’s. Known affectionately as “Mrs. J,” Betty was a beloved teacher, admired for her enthusiasm, devotion, and openness to new ideas. In 1991 Sen. Herb Kohl named Betty as one of the state’s top 100 teachers. More than any individual recognition, however, Betty was most proud of what she, her colleagues, and her students had accomplished collectively. “One beautiful thing about this award is that it also recognizes the school,” she said in a newspaper interview at the time. “It’s something we’ve been able to do together.” Betty’s dedication to teaching was motivated by her own life-long love of learning. She took numerous summer courses, launched innovative hands-on learning projects (such as an archeological dig on parish grounds), and made fresh lesson plans for every class, every year. When Betty got the chance to travel, what she was most interested in seeing were schools. Her favorite pictures from Rome and Jerusalem are of schoolchildren out enjoying recess. And the highlight of her trip to the Netherlands was being able to visit a grade school and meet with students. They were fascinated when Betty began reading from a large stack of letters she had brought along from her class at St. Anthony’s describing life in Park Falls and asking what life is like there. One of Betty’s other great loves was music. She served as the organist and liturgist at St. Anthony’s for over 25 years. Her children remember her often hurrying off to church to spend long hours practicing music with students, especially before big holiday masses. Every year, as Christmas approached, a growing host of angel figurines would begin to quietly appear on her organ before mass, gifts from her many friends in the parish. Betty also helped to bring musicians to Park Falls through her work in the Woods and Waters, Friends of the Arts, and Friends of the Library programs. In her final years, Betty played piano for the weekly church service at Park Manor, ever determined to meet her own high standards for herself as a musician. Betty was always eager to make the most of her time and enjoyed many things: family gatherings, visits with friends, books, a good game of Boggle or Upwords, and anything in her favorite color, blue. Betty’s family would like to thank the many kind people in Park Falls who added to her life, especially the staff at Park Manor, who helped make a new and loving home for her over the past few years; Dr. Parris at Marshfield Clinic and Dr. Kasirye in Park Falls, who were always there for her; the many former students who would stop and greet Betty with a friendly “Hi, Mrs. J!” when she was out and about in Park Falls; and the doctors and nursing staff at St. Clare’s, who took such good care of Betty and her family in her final days. Betty was buried in a family graveside service shortly after she passed. A memorial service is being planned for later this year. She is survived by three brothers: John, Emet, and Joe Talley. Three sisters: Clare Oskay, Lou Elder, and Ann Talley. Six sons: Chris, Fred, Eric, David, Jon, and Marty. And eight beautiful grandchildren she dearly loved. If you would like to remember Betty with a memorial gift, her family suggests St. Anthony’s or the Park Falls Public Library.

The family of Elizabeth "Betty" Jarosinski created this Life Tributes page to make it easy to share your memories.

Send flowers to the Jarosinski family.