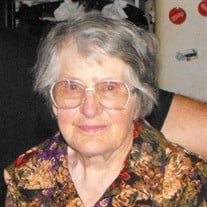 Edith Elizabeth Sturm-Page Age 94, of Park Falls, died on Monday August 31, 2015 at Park Manor Nursing Home in Park Falls. She was born March 1, 1921 in Arpin, Wisconsin. Her parents were Henry and Margaret (Buschlen) Sturm. She moved to the Park Falls area when she was nine. Edith was a 1940 graduate of Lincoln High School. She attended Wausau Business Institute and worked as a bookkeeper at the Fashion Store in Wausau until her marriage to Edwin Page on June 8, 1946. She was an avid gardener, quilter, and crafter. She was an active member of Peace Lutheran Church and part of the ladies quilting and Deborah Circle. She was also an active member of the Good Cheer Homemakers Club in Price County. She is survived by six children, Susan Earl, Carol Stream, Illinois; Thomas (Michelle) of Park Falls; Patty Lewandowski of Park Falls; Richard (Joan) of Park Falls; Gerald (Kathy) of Philips and Kathryn (Stephen) of Phillips, 13 grandchildren, 2 step-grandchildren; 8 great-grandchildren; 2 step-great-grandchildren; one sister Lorraine Nelson of Scotts Bluff, Nebraska; and by many nieces, nephews, other relatives and friends. She was preceded in death by her parents; her husband; two sons-in-law David Lewandowski and LeRoy Earl, six brothers, David, Herbert, Vernon, William, Miles and Henry Sturm; and two sisters, Nelda Hoffman and Ruth Elmer. A memorial service will be held on Saturday September 5, 2015 at 9:00am from Peace Lutheran Church in Park Falls. Rev. Dale Heinlein will officiate. Interment will follow at Nola Cemetery in Park Falls. A gathering of family and friends will be held on Saturday from 8:00am until the hour of the service at the church.

The family of Edith Elizabeth Sturm-Page created this Life Tributes page to make it easy to share your memories.

Send flowers to the Sturm-Page family.