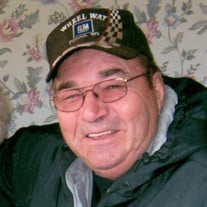 Daniel J. Kundinger age 81, of Park Falls, died on Friday February 11, 2022, at Marshfield Medical Center in Park Falls. He was born on January 27, 1941, in Park Falls, the son of Anthony and Ruth (Walker) Kundinger. He was a lifetime resident of Park Falls and worked for Bunny Bread and Mrs. Carter’s Bread before working for the Flambeau Mill. On May 12, 1962, he married Judith Turney, who preceded him in death in 2000. On September 8, 2001, he married Elizabeth Kicherer. Dan enjoyed playing cards, cutting firewood, being on his tractor, hunting & fishing, and going to the casino. He most enjoyed spending time with his family and friends, especially his grandchildren and great-grandchildren.’ He is survived by his wife Betty of Park Falls, (4)children: Natalie (Ronald) Schoch of Park Falls, Tony (Laura) Kundinger of Park Falls, Danny (Renee) Kundinger of Phillips, and Crystal (Jerry) Litwaitis of Hewitt, (4)step-children: Jake Didier of Green Bay, Lois Wendt-Didier of Green Bay, Linda (Matt) Michalski of Park Falls, and Wanda (Brent) Burhans of Park Falls, (16)grandchildren, (18)great-grandchildren, his brother Larry Kundinger of Park Falls, and his (2)sisters: Lois (Charles) Fuhrman and Ruth (David Wagner) Burhans, both of Park Falls. He is further survived by many nieces, nephews, and other relatives and friends. He was preceded in death by his parents, his first wife Judith, his brothers: Anthony, David, Ben, and Eugene Kundinger, and sisters: Verna Behreandt, Gladys Rienow, Eleanor Schantzen, and Dorothy Christianson. A Funeral Mass will be held at St. Anthony’s Catholic Church in Park Falls on Friday February 18, 2022, at 11:30am. Fr. Shaji Pazhukkathara and Deacon Chet Ball will co-officiate. A visitation will be held at the church on Friday from 10:00am until the hour of the service. Interment will take place at a later date at Nola Cemetery in Park Falls. Birch Street Funeral Service is assisting the family. www.birchstreetfuneralservice.com

Daniel J. Kundinger age 81, of Park Falls, died on Friday February 11, 2022, at Marshfield Medical Center in Park Falls. He was born on January 27, 1941, in Park Falls, the son of Anthony and Ruth (Walker) Kundinger. He was a lifetime resident... View Obituary & Service Information

The family of Daniel J. Kundinger created this Life Tributes page to make it easy to share your memories.

Send flowers to the Kundinger family.