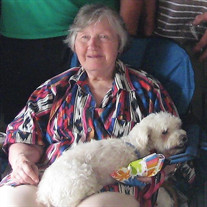 Bernice H. Bergdorf age 90 of Fifield, died on Friday March 10, 2017 at her home. She was born on September 19, 1926 in Park Falls, the daughter of David and Barbara (Kundinger) DeMars. Her early life and schooling were in Park Falls. After high school graduation in 1944, Bernice moved to Milwaukee, where she served her country working in a factory for the War effort. She married Charles William Bergdorf on May 29, 1948 in Park Falls. They resided in Milwaukee before moving in 1951 to West Bend on a small farm. She later relocated and operated a larger dairy farm outside of West Bend. She also worked for West Bend Aluminum from 1967 until 1971. In 1978 she relocated to Belvidere, IL until moving in 1980 to Fifield where she worked for several area restaurants, the Arthur DeBardeleben Law Office, and the National Forest Service Park Falls Office until her retirement. Bernice was a member of the St. Francis Altar Sodality and St Francis of Assisi Catholic Church in Fifield. She enjoyed gardening, reading, bowling, darts, horse shoes, and was an avid quilter and knitter. Bernice especially loved her dog Chloe who passed with her on Friday. She is survived by: (5)children: Jerome (Barbara) Bergdorf of West Bend, WI Stephen (Donna Mae) Bergdorf of Watertown, WI David (Rona) Bergdorf of West Bend, WI Eric Bergdorf of Medford, WI Holly (Jeffrey) Haley of Arlington, VA her sister Evelyn Bradle of Park Falls and 13 grandchildren, 22 great-grandchildren, 11 great-great-grandchildren plus many nieces, nephews, and other relatives and friends. She was preceded in death by her parents, (2) brothers and sister-in-laws: David & Irene DeMars and Arthur & Dorothy DeMars, an infant sister, and her former husband Charles William Bergdorf. A memorial service will be held on Friday March 24, 2017 at 2:00pm from St. Francis of Assisi Catholic Church in Fifield. Fr. Shaji Pazhukkathara will officiate. A visitation will be held on Friday at the church from 1:00pm until the hour of the service. Interment will take place at Nola Cemetery in Park Falls at a later date. In lieu of flowers, memorials to the St. Francis Altar Society or the charity of your choice would be appreciated.

Bernice H. Bergdorf age 90 of Fifield, died on Friday March 10, 2017 at her home. She was born on September 19, 1926 in Park Falls, the daughter of David and Barbara (Kundinger) DeMars. Her early life and schooling were in Park Falls. After... View Obituary & Service Information

The family of Bernice H. Bergdorf created this Life Tributes page to make it easy to share your memories.

Send flowers to the Bergdorf family.