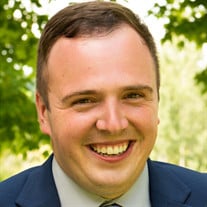 Benjamin Caleb Deitz of Hatley, WI entered the kingdom of heaven in the early hours of Easter morning, April 17th, 2022, a day before his 28th birthday. Ben was the oldest of four boys born to Rev. and Mrs. John and Lori Deitz. He was born in Fort Wayne IN, was baptized into Christ at Emmaus Lutheran Church in Fort Wayne, and lived in various parts of Illinois for the first few years of his life. He fondly remembered his days in Okawville, IL and remained a fan of the St. Louis Cardinals and Blues into adulthood. At the age of 5, Ben moved to Butternut, WI where he spent the rest of his childhood and graduated high school. He was confirmed at St. Paul Lutheran Church in Butternut, WI where he remained a faithful member. He worked for the village of Butternut and could often be found shoveling snow or mowing lawn for the village. After high school, Ben attended WITC in Ashland and received his Associate degree in Information Technology Networking. After a year at Stout pursuing his Bachelor's degree, Ben took his first IT job at the Spooner School District in Spooner, WI. He then moved to Wausau, WI where he worked as the IT Director for Marathon County Public Library, and later took a job at Wittenberg-Birnamwood School District as the Network Administrator In 2016, Ben met the love of his life Kysa (Franseen) Deitz. Kysa fell in love with Ben’s compassionate heart, beautiful singing voice, delicious cooking, but above all else his faith and knowledge of Jesus. Ben and Kysa were united in Holy Matrimony on August 1st, 2020 at Holy Trinity Lutheran Church in Boyceville, WI. The couple bought their first home together in Hatley, WI where they welcomed their beautiful baby boy Henry John Deitz in September 2021. Benjamin was a loving, devoted and faithful husband and father who loved his family deeply and unselfishly. A true example of a Christian husband, father, son, friend, and coworker; he was patient, kind, and always wanted to help those around him, with a smile on his face that lit up any room. This legacy of kindness toward others continues on after his death as Ben’s wish was to be an organ donor. Many people will have continued earthly life as a result of his gifts. Benjamin was a faithful member of the Lutheran Church-Missouri Synod, with a singing voice that resounded throughout all of the various churches he attended in his life. While his favorite pastime was spending time with his family, Ben also enjoyed gardening, fishing, and cooking. Benjamin is survived by his wife Kysa, 7 month old son Henry, his parents John and Lori Deitz, 3 younger brothers Luke, Jacob, and Isaiah Deitz, father- and mother-in-law Eric and Tracy Franseen, brother- and sister-in-law Kyle and Alex Franseen, grandparents Bert and Verdell Krueger, Rondell and Marilyn Hybben, Oscar Franseen, and many other special aunts, uncles, and cousins. Ben was preceded in death by his grandparents Jerry and Nancy Deitz, Uncle Jim Deitz, and Uncle Marty Krueger. Funeral services will be held on Saturday, April 23rd at 11:00 a.m. at St. Paul Lutheran Church in Butternut, WI with Rev. Shawn Andersen of St. Peter Lutheran Church-Dorchester, WI officiating. Burial will be at Lakeview Cemetery west (Mudhen Lake Cemetery) of Siren, WI on Sunday April 24th at 11:00 a.m. Visitation will be held Friday April 22nd from 4:00-8:00 p.m. at the church as well as from 10:00-11:00 a.m. prior to the funeral service.

Benjamin Caleb Deitz of Hatley, WI entered the kingdom of heaven in the early hours of Easter morning, April 17th, 2022, a day before his 28th birthday. Ben was the oldest of four boys born to Rev. and Mrs. John and Lori Deitz. He was born... View Obituary & Service Information

The family of Benjamin Caleb Deitz created this Life Tributes page to make it easy to share your memories.

Send flowers to the Deitz family.